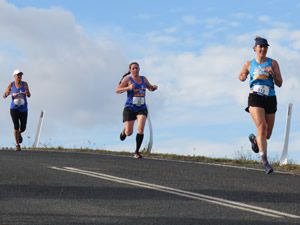 Mackay Road Runners and race day sponsor, TriActiv8 generously joined forces to host the annual Bonson’s Scrub Road 6km & 12km hilly run which included the very challenging ascents and descents of The Leap’s Ian Reddacliffe Drive. In the absence of Club President, Tim Magoffin, who apparently thought his footy team would win at that time, Paul Tilse was the substitute Race Director, announcing the course description and latest notices.  Paul thanked race sponsor, TriActiv8’s Nikki Giles who was in Mooloolaba competing in the Sunshine Coast’s famous half-ironman event. Nikki had a great race finishing in 5 hours 17 minutes 45 seconds ahead of a sensational effort by her daughter, Rylea Giles (6:45:33)….congratulations girls!

Paul also announced that four time Olympian, Mackay girl, Benita Willis will be in Mackay this Friday as the guest Race Ambassador for the inaugural Cityrun being held Friday, 15th September at the Mackay Marina. Mackay Road Runners will also be hosting the Annual Benita Willis Handicap 10km Trophy where the winner is the first handicapped runner, male or female, to cross the line in the 10km event from a handicap start at the Bluewater Lagoon Trail.  The winner scores themselves the enormous prestigious perpetual Trophy of an awesome Benita Willis framed and signed shirt. The 2016 winner, Ashlee Scott, will be on hand to congratulate the 2017 winner, which, if she continues her stunning form, could be herself!!!

Meanwhile, the TriActiv8 Bonson’s Scrub Road 6km & 12km event was a great success with the winner of the TriActive8 prize of a Garmin watch,  the very ecstatic Scott McIntosh. Scott ran the best improved time from the previous year out of the thirty plus participants across the 6km and 12km events. Jo Skinner was the runner up, scoring herself a well-deserved block of Freddo chocolate, which she may or may not share with Craig, Chris or Tam. There were many other fine performances amongst the quality field including a tight tussle between  Carl Pinkstone and Julian Picot with Carl being the eventual winner followed by Julian and Shawn Claydon.  Jared Spence enjoyed the challenging course as did Russell VandenBosch, Tim Caddy, Leon Ryan, Andrew Wallace, Ricky Parker, Stuart Sprott, Shane Barben, Alan Zamparutti, Mark Walz and Andrew Short. Relative new runner to the Club, Rebecca Woods easily scaled the undulations of Ian Reddacliffe Drive together with Ashley Davies, Carolyn Steginga, Judy Zahn, Carmel Mahon, Karla Hook, Jo Skinner, Anna Walsh, Ulrika Widdowson and Sarah Jensen. 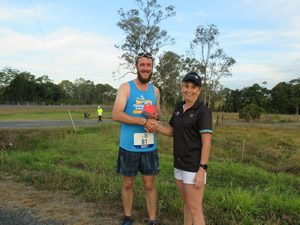 Junior 6km runners also had a testing time, even though they had just the one lap to complete. Rachel Silvestri, who loved the tough outing, was joined by Layla Sanders and Maddy Price who easily accounted for the course which was practically in her own back yard.  Junior runner and big improver, Simba Walz had a sensational run in the 6km racing well against fellow talented junior runner, Jamie Sanders.

Many thanks to race day volunteers who, if not for them, the event would not have been a success – Race Sponsor TriActiv8 (Nikki Giles), Paul Tilse, Andrew Short, Lindsey Wiggins, Greg O’Neill, Ange Furdek, Jacqui Paterson,  Simon Henderson and Sandra Henderson.

Congratulations to Matt Stevens and Pieter VanVuren who sensationally competed in the Surf Coast Ultra Marathon events over the weekend ie the 50km and 100km respectively.  Pieter astonishingly ran a very impressive 15 hours 40 minutes to cross the 100km finish line with hundreds of teams and individual competitors.  Matt also had an incredible run  in the 50km ‘short’ race smashing the course in 7 hours 8 minutes.  The tough course was held in the State of Victoria’s Surf Coast Shire – Surf Coast is the start of the Great Ocean Road, including the main towns of Torquay, Lorne, Anglesea, Aireys Inlet, Winchelsea and the world-famous Bells Beach. Matt and Pieter enjoyed stunning beaches, rich coastal scenery, impressive waterfalls and the natural beauty of amazing trails…..what a mighty effort by the locals….well done!