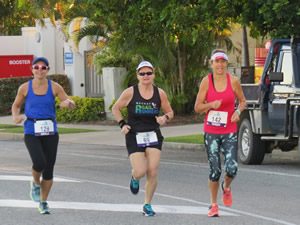 Over forty Mackay Road Runners welcomed the early morning chill factor as they braced themselves for the 6.30am start of the much anticipated annual Pre-Mother’s Day 5km & 12km last Saturday morning. The cool, breezy conditions were a little testing in the early stages, however, runners appreciated the perfect running conditions as the race progressed.

Club President, Tim Magoffin welcomed runners to celebrate the most important day of the year, Mother’s Day, with a handicap start 5km and 12km run from the Casu Jacks Cafe, Mackay Marina. Casu Jacks’ Hostess, Pauline welcomed supporters to partake in a scrumptious brekky whilst waiting for their family and friends to finish their event. Runners then took advantage of the tasty menu to rehydrate and refuel just in time for the sensational Mother’s Day random draw prizes donated by Mackay Road Runners. 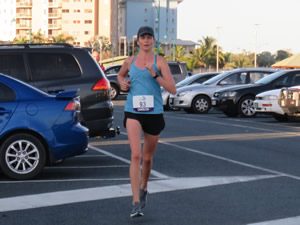 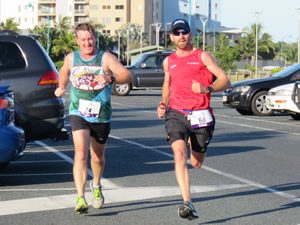 Many thanks once again to race day volunteers, Andrew Short, Tim Magoffin, Lindsey Wiggins, Jo Skinner, and Paul Tilse. Great work by Lindsey to have results updated on the Club website so quickly, much appreciated!

Mackay Road Runners continued further celebrations in the afternoon when one of their Life Members, Shawn Claydon’s family hosted his 50th Birthday Party. Shawn’s running achievements were a major highlight of the event, with many of his running buddies in attendance, including fellow Mackay Road Runners Life Members, Charlie Martel, Judy Zahn, Paul and Janelle Tilse. Many thanks to Shawn’s sister, Sharon and his lovely family and friends for a beautiful afternoon.

Most, but not all runners, are now looking forward to the next Club Championship race, the Alarm Guys Junior 5km and Senior 30km to be held our generous hosts Brendan, Julie, Millie and Hughie Bishop’s, 39 Vassallo Drive, Glenella residence. The race commences 6am, the runners are required to be ready to race by the 5:50am briefing with their race chips and numbers attached to themselves and registered in with the timekeeper. Runners are also requested to bring some extra coin for post-race treats donations.

All the best to ultra-marathon runner, Tim Caddy, who will be competing in the North Face 100km this weekend in the NSW Blue Mountains.