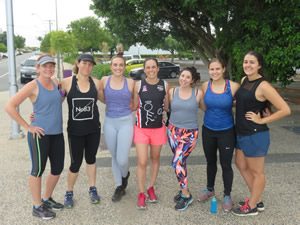 With the Mackay Road Runners Summer social running program drawing to a close, Club Captain/Race Director, Jim Ford once again hosted a unique event from the Magpies Sporting Complex. The 6km & 12km run had participants opting to tackle whatever distance they chose, in addition to estimating the actual exact distance of their chosen course, with the winners taking the usual coveted prizes and bragging rights for closest estimate.

Mackay Road Runners also welcomed the North Mackay Saints AFL girls team at the midweek social 5km at the Bluewater Quay. The girls have been very committed over the last several weeks to their pre-season training in a bid to better their 2017 season Grand Final performance…go The Saints!

The Mackay Road Runners Summer program continues for two more weeks, with this Sunday’s run commencing at The Mackay Harbour North Wall carpark at the usual time of 5.30pm. As this is an informal, social group training session, only a gold coin cost for participants is requested which goes towards post run refreshment, prizes, etc….. All welcome to attend, no need to be a Club Member, bring your friends and family for a great hour of running and social banter.
The AGM was held earlier this week, with the formalities of the 2018 official committee members and running program still to be announced….watch this space or visit mackayroadrunners.com.au