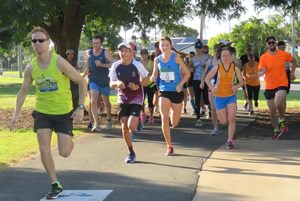 Approximately thirty Mackay Road Runners competed in the very social “Nominate your Time” 5/10km event last Sunday which commenced 4pm from the Lagoons Botanic Gardens Playground.  Club Captain Jim Ford and Volunteer Co-ordinator, Paul Tilse were in charge of recording runners’ guesstimated times and collecting their timing devices.  Runners then had to run their event watch-free and cross the finish line in a time as close as possible to their nominated time.

In the 5km, winner, Bill Morgan’s time was perfectly outstanding as he ran his time to the exact second. His twenty-three minute fifty second time was amazingly spot on, however, this pacing business must be a family trait, as his son Will, collected second prize for being the next closest to his predicted time. Both runners were ecstatic with their ‘tick tock’ and ‘time-out’ prizes, with Will gladly taking responsibility of getting them home in one piece….yeah right!

In the 10km event, Scott McIntosh was exceptional with his timing as well, being only three seconds off his pre-nominated time, therefore taking home the fabulous ‘tick tock’ bickies award.  Second place was almost sealed by Anthony Blines with a ten second differential, however, the final runner, David Isbister, scored a nine second difference to his guess, snatching the ‘time-out’ prize almost literally out of Anthony’s hands.  Being the congenial, sharing and caring person he is, David was happy to share his prize with Anthony as they happily devoured the prize in a time much less than their 9/10 second race deficits….well done guys! 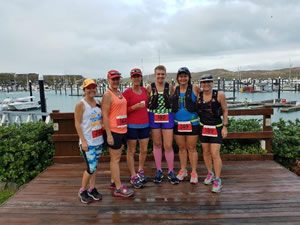 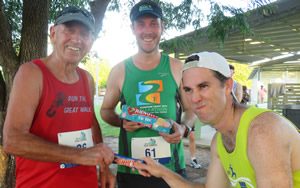 The next Mackay Road Runners event will be held this Sunday from 39 Vassallo Drive, Glenella at 6am.  The 30km and 5km Club Championship event will be hosted by the Bishop Family with the usual treats on offer.  The Icey Cup Guys, Milly and Hughie, have stepped up once again, however, their stock will feature two flavours this year at fifty cents each.  The Bishops will also be supplying a BBQ breakfast, tea and coffee with donations to The Indigenous Literacy Foundation who are a national book industry charity, which aims to reduce the disadvantages experienced by children in remote Indigenous communities across Australia, by lifting literacy levels and instilling a lifelong love of reading.  Mackay Road Runners appreciate the Bishop’s awesome generosity therefore, please support their wonderful time and efforts in staging the event from their house as well as offering delicious treats for a worthy cause……thankyou Millie, Hughie, Julie and Brendan!

The BMA Mackay Marina Run in only one month away!!!!! With early nominations closing on 30th April, registrations are still open, however your race singlet/shirt size is now not guaranteed.  Go online now to secure your race spot as well as booking in for the Friday Night pre-race social event with Race Ambassadors,