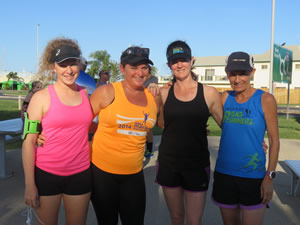 Approximately fifty runners braved the very humid conditions last Sunday afternoon at 5.30pm for a series of hill sprints on the very testing Mt Bassett ascent.  Runners easily paced themselves from the Old Mulherin Park precincts for the 1.5km run to the base of Mt Bassett, whereupon Club Captain and race director, Jim Ford explained the hill repeat concept that suited all abilities.

The fastest runner, Shawn Claydon lead the field up and down Mt Bassett, sounding the alarm once he reached the bottom.  Runners then stopped at varying points on the hill depending on where they were when Shawn completed his first lap. All runners then had a one minutes rest before the whistle was blown for them to run up the hill from where they stopped, then head for the finish line….that was one rep.  As Shawn was the lead runner, he actually did two laps as his one rep…. that’s what happens when you’re fast! All other runners did varying distances depending on their placement on the hill.  Jim’s innovative course meant that all runners would be completing the rep at approximately the same time.   Participants then had a two minute break then repeated the course three more times, before heading back to Old Mulherin Park for some well-deserved post run fruit/cake/random draws. 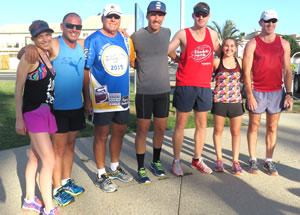 Runners are now looking forward to Jim’s next exciting race course this Sunday at 5.30pm from the Railway Station carpark, Paget, which in previous years, has always proved to be very interesting!  All new and existing runners are most welcome to attend, no need to be a Mackay Road Runners Member as the off season runs are of a very social nature with only a gold coin donation towards after run refreshments.

Those interested in becoming a 2016 member are invited to join up online for a very reasonable cost of:- $55 for a single adult; $110 for a family; $22 for a junior (under 18 years of age) – due last day of February to be eligible for handicap/club championship points.  There are weekly race fees: Members – $2 per race per person (senior and junior) and payable on registering each race day; Non-Members – $10 seniors, $5 juniors and no race time recorded. For any further information, contact the Secretary 0403 344 289 or Janelle 0400 99 7432.