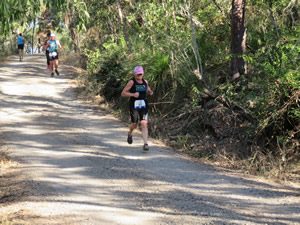 The Mackay Road Runners 21km trail finally got off to a flying start despite being cancelled earlier in the year due to atrociously dangerous weather. The conditions started off with very hazy visibility covering the start line at 8am, however, the skies cleared to a perfectly sunny day by 9am. Runners had the pleasure of racing on the well cleared, dry trails of the Eungella National Park which were previously severely damaged but repaired to pristine condition by awesome Park Ranger Greg Lennox and his team of National Parks and Wildlife workers.

Many thanks to Race Director, Matt Stevens who spent an enormous amount of time leading up to the event, during and after. Race organisers and runners were very grateful to many generous sponsors and volunteers who made the day possible. The Eungella Trail run will be an annual event on the Mackay Road Runners program due to the rising popularity of trail and off road running locally and interstate.

Mackay Road Runners Club are very excited to be staging its forty-first Presentation Night this Saturday from 6pm at the newly opened Breakwater Bar & Restaurant (old Yacht Club). The Club warmly invites all Members, their families and friends to join them in congratulating their peers on a great year of successful sportsmanship and running. The Club is looking forward to seeing as many members on the night to take home a series of coveted awards including the Handicap Champion, Male and Female Junior and Senior Club Champions as well as the usual very well received random prizes. There will be a lucky door prize from ESafe Fitness to the value of $168 which has been donated by road runners, Erin, Kristian, Axel and Miss D…..so, what are you waiting for, rsvp now for an enjoyable evening of congenial and supportive heckling!