Approximately 40 runners tackled the very challenging hills, sand and rainforest, starting with the trail at the north end of the beach before proceeding along the beach to Wedge island (as the tide was out) onto the steep climb up to Turtle Lookout and then back to the car park area. A brave few then took on the usual Mackay Road Runners Club Championship course via the 4WD track and the scenic rainforest loop.

Martin’s course description was perfectly in sync with the excellent environmentally conscious marking by Martin, Leon Ryan and Wayne McMurtrie. The organisers including race sweeper, Wayne McMurtrie were rapt with the attendance as well as the fact participants were acutely aware of their surroundings and fellow competitors thus ensuring no one got lost. This made for excellent comradery and a popular new addition to the Mackay Road Runners formal calendar. The run was initially introduced in the Summer off season series by Club Captain, Jim Ford, however with the increasing interest in trail running and the smiley satisfaction on the runners’ faces, this event will surely be a staple event of the Club’s regular formal program. 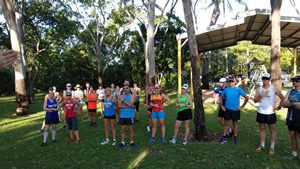 Many thanks to the local Queensland Parks & Wildlife team for their excellent work in maintaining the trails in such pristine condition which is very difficult in the current climate. Many thanks also to Mackay Road Runners Members who participated and took special care whilst utilising the beautiful facilities….we are very fortunate to have such an awesome landscape to enjoy.

The local and wider community are invited to participate in the North Queensland Games 5km & 10km run on Sunday 6th May hosted by the Mackay Road Runners Club, commencing from the Meadowlands Amphi-Theatre, Botanic Gardens, West Mackay. All those wishing to enter need to register on line by the 26th April at www.nqsports.com.au

Runners also have the option of participating as an individual or in a team at the 13th annual Stamford Financial Hamilton Island Hilly Marathon/Half Marathon and kids races on the same day. This event is becoming one of Australia’s most iconic must do road/trail/hill running events in the most sensational location in the World…..register now!

Once the NQ Games and Stamford Hamilton Island Hilly Marathon events are run and won, time to gear up for the BMA Mackay Marina run which will follow four weeks later on the Sunday, 3rd June. Check out mackaymarinarun for race options. The BMA Mackay Marina Run is flat and fast and celebrating its 10th Birthday….register now and support your local branch of the Leukaemia Foundation!