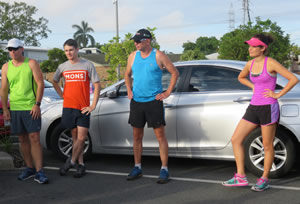 Over forty new and existing runners need to be congratulated on their huge efforts at last Sunday’s Base to Mater Hospitals 6 & 10km team event.  Race Director/Club Captain, Jim Ford once again came prepared with an unusual course concept whereupon runners were teamed up with other runners as per their sign on number.  Runners had the option of a shorter course from the Base Hospital to the beginning of the Canelands Bluewater Trail boardwalk and return, whilst the longer course runners continued to the Forgan Bridge.  Competitors had the pleasure of running across the bridge, Riverside Drive towards Sams Road, Mater Hospital and return to the start via the road under the Ron Camm Bridge, Hume Street and Bridge Road.

Jim instructed teams to regroup every fifteen minutes at various checkpoints, so that they could support each other throughout the entire course.  All runners did a great job encouraging not just their team, but all other runners so that they could all get to the finish line feeling very proud of their achievements in the tough conditions. Jim does a great job involving all runners into these types of team events, thus creating an environment of great comradery.

The oppressive conditions saw many runners sensibly take the shorter option due to their individual running experience, hydration and injury issues.  Runners need to ensure they take extra care with their hydration requirements, particularly in Mackay’s extremely humid summer months. 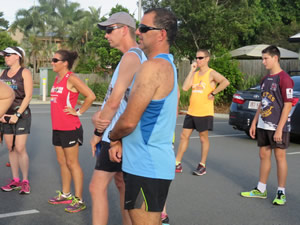 Farewell and best wishes to Liam Mumford as he travels back to the United States this week to continue his Athletics Scholarship in Virginia….I’m sure the weather conditions there will be way cooler than he is currently experiencing at home. Mackay Road Runners look forward to catching up when he visits later in the year.

Congratulations to Rachel Silvestri on a great running season last year, where she only just collected her 2015 trophies for her gold medal performances in the Junior King of the Mountain and Mackay Road Runners Junior Female Club Champion.  Rachel, who has been very busy with her running, school and family commitments was unable to get to the Club’s Presentation Night, was very excited to be presented with her trophies.  Rachel is in great form and set to have another successful year of running after easily completing the 10km run at today’s event.

Intending Mackay Road Runners members are reminded that Club registration for 2016 is open via the registration page with fees for seniors, juniors and families the same as last year.